High trait neuroticism is a risk factor for mental health problems, and a number of neuropsychiatric syndromes, including depression. Besides the example given here, we have found in other published work (Jones et al, 2012), and in unpublished replications that trait neuroticism can be identified. The fact that neuroticism in particular is reflected in the face raises the question about whether facial appearance may reflect a risk factor for mental health disorders.

We therefore looked at whether appearance gave cues to depressive symptomsScott et al, (2013), and any reaction of observers to this appearance. 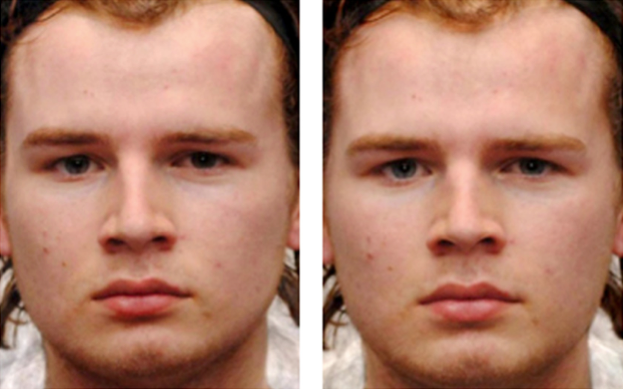 The image above is a sample stimulus, in which an image of a person without depression has been morphed towards the appearance of the men in our sample with the highest levels of depressive symptoms (left), and the lowest levels (right). Observers were better than chance at identifying this difference. Although the effects were not large (60% accuracy), they replicated over two independent stimulus samples, different depression measures, and different observer samples.

However, just as important as the ability to identify depression, observers also made more negative social attributions to the high depression images. That is, the risk is that people with high depressive symptoms, without saying a word or making an action, may be involuntarily broadcasting a message of negative personality traits associated with social undesirability. At the very least, this would mean that people with a prototypical high-depression face would face barriers and challenges for social inclusion that others would not. A failure to meet these social challenges could heighten any risk of depression, by making social exclusion more likely. This hypothesised vicious cycle is an example of how appearance might influence behaviour (in this case higher risk of depression and lower well-being), and a risk factor that needs to be better understood.

Can the facial appearance of people with and without a mental health condition tell us anything about the origin or basis of that condition? Possibly. Consider the extreme male brain theory of autism (Baron-Cohen, 2002). Fetal testosterone organises many aspects of future development, not only sex characteristics, but more general neural and behavioural characteristics. We hypothesised one of the effects of this exposure might be to increase facial masculinity in adolescence. We therefore tested whether men high and low in autistic quotient scores differed in perceived masculinity. 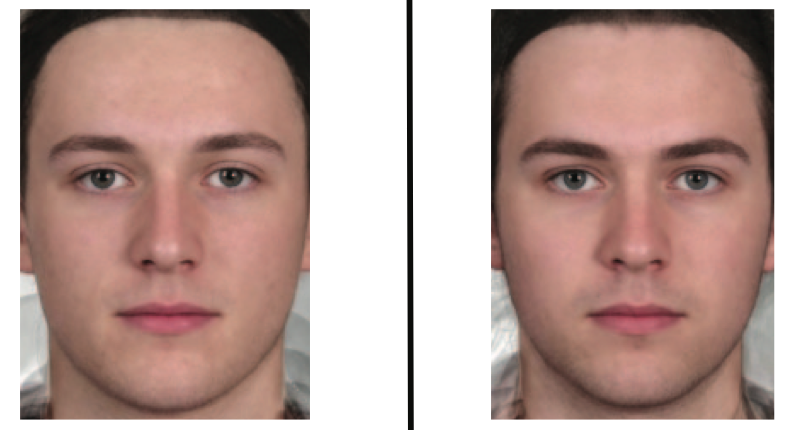 One of the stimuli used in our test (Scott et al, 2014) is above. The left image is a composite of 15 men with the lowest AQ scores; and the right, the 15 highest AQ scores. Observers rated the high-AQ composites as more masculine.

Although our results seem consistent with a correlation between AQ ands testosterone exposure, as with depression, we may also be seeing an important misattribution. More masculine males are more likely to be perceived as higher in dominance, aggression, and other characteristics involving male competition. But these competitive traits are not seen as central to high AQ. AQ. There may therefore be a mismatch between observer expectancies, based on facial masculinity, and the actual behavior of high-AQ men. This mismatch, namely, the perception of individuals with high AQ scores as having social traits that they do not exhibit, could lead to social problems.