Humans are both highly visual and highly social beings. People are quick, perhaps to a fault, to make attributions of personality and other social traits on the basis of mere appearance. Why are we are so willing to make these judgements? It is very surprising to me, but social inferences from mere appearance can be accurate. Specifically, when people are asked to adopt a neutral pose for a photograph, the resulting image can be revealing of stable behavioural biases. Below are two examples taken from Kramer & Ward, 2010:

Agreeableness is a trait derived from factor-analytic models of personality, relating to how warm, sympathetic, and interested someone is in other people. 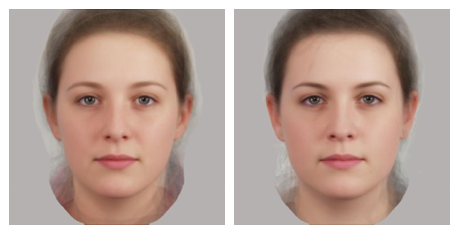 Results like this suggest that the faces of highly sympathetic and less sympathetic women contain different kinds of information, and observers can potentially extract this information to identify the different personalities.

There are some interesting things about these faces. The averaging process has produced face images that are similar. More than one person has spontaneously commented they look like sisters. The expressive differences are also pretty minimal. For example, neither has an obvious smile. This is even clearer if you use your hand to obscure the upper half of the face. However, the relatively small differences between the faces produce qualitatively different impressions.

Another factor-analytic personality trait, relating to emotional stability, or the lack of it, anxiety, susceptibility to depression, etc. High trait neuroticism is a risk factor for many mental health conditions. 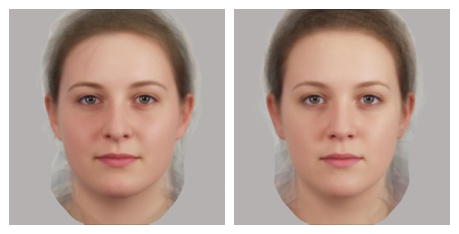 What is responsible for accurate judgements?

Not sure yet! In principle the correlation we see between appearance and behaviour could be the result of:

There is now quite a lot of evidence that trait inferences from neutral faces are not simply random, arbitrary, or "in the eye of the beholder". The list below is not comprehensive, just illustrative. You can refer to my publication page or elsewhere on this site for other examples from my lab.

Little & Perrett, 2007. Uses composite faces like the above to show links between apperance and personality.

Holtzman, 2011. Discrimination relating to the "dark triad" of psychoticism, narcissim and Machiavellianism.

And for a critical view on the accuracy of trait inferences from the face, see Todorov & Porter (2014). The view here is that variability of expression would overwhelm any valid facial cues. It is certainly true that someone smiling looks more agreeable than the same person frowning: that is, the "thin slice" of behaviour captured by the photograph is not representative of all behaviour. To my mind, we should therefore be careful to quality our results and say that when people are asked to adopt a neutral pose for a photograph, the resulting image can be revealing of stable behavioural biases.